The Training Band held a Christmas ‘Coffee and Cake Morning’ on Saturday, 1 December 2018 at Froxfield Memorial Hall. There was a Christmas ‘Goodies’ Stall and the usual refreshments and raffle draw.  Parents, friends and supporters packed the hall to listen to a mix repertoire of music, including festive tunes.

Unfortunately, summer holiday time is swiftly followed by the onset of September which brings changes of school and University entry for some of our players. We must say ‘Au Revoir’ to Matthew Nocton who has been playing with the Training Band since he was just a little boy and is changing school and to Andrew and Oliver Gray who are off to University. Andrew and Oliver have only been playing for 10 months and have made remarkable progress in such a short time. 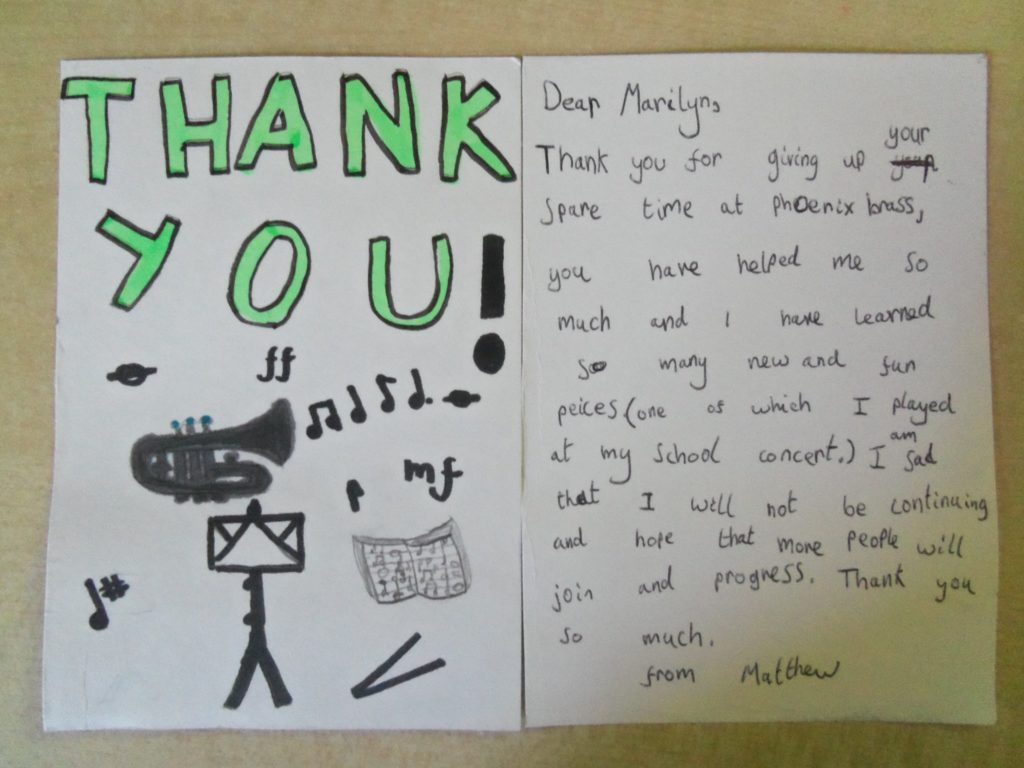 Luckily, Matthew is leaving his Mum, Mary, behind on euphonium and Andrew and Oliver leave sister, Hannah, on cornet.

Coombe End Court Nursing Home in Marlborough was the venue for the Training Band to play at the annual Summer Fete Event. Playing in the nursing home gardens under the baton of David Watson the Training Band, supported by some musicians from the Main Band, performed a wide range of music to residents, relatives and friends.

A broken leg and a reliance on crutches does not prevent Isla’s eagerness from attending a recent Training Band rehearsal.  Isla is pictured with fellow Training Band members (left to right) her twin sister, Eva, and Zara.

On 21 April 2018 the Training Band celebrated the birthday of Her Majesty Queen Elizabeth II (and that of our MD, David Watson) with a red white and blue ‘Talent Concert’.  Marilyn Mason, Training Band Director commented “As well as the birthday celebrations it was an opportunity for the Training Band players to show off their many other talents in a non-competitive situation. And what a wonderful array of hidden talents came to light!! We had a First World War poem which was sensitively recited by Bill who was fully dressed in the appropriate uniform of the era and a splendid trombone and piano duet of The Acrobat played by Andrew and Oliver.

Cornet solos, a piano solo, our very own singing guitarist and even a dancing display from Pat and Barry were all thoroughly enjoyed by our audience, as were the ensemble pieces played by the band.

Congratulations must go to all the Band and soloists for entertaining us all so well. It was not a contest, they are all winners, but a concert to show what a talented bunch of musicians the Phoenix Brass Training Band consists of!!”

To celebrate the opening of the new Community & Youth Centre in Marlborough the area Board held a fair there in March 2018 with a youth theme. The area Board offered each organisation represented at the fair the opportunity to bid up to £500 towards a planned project or upcoming expense. The funded projects were voted on by everyone attending the fair.

The Phoenix Brass Training Band was invited to attend the youth fair and Marilyn Mason, Training Band Director, organised a super display to promote Phoenix Brass. Thanks must go to Scott Granger for producing some attractive and informative leaflets and for his attendance to encourage people to vote for the Training Band.

The judges complemented the display and input on the night and awarded £500 to the Training Band towards a new small Bb instrument.

Thanks must go to Marilyn for all her hard work, to Scott Granger for his help on the night and to everyone who voted for the Training Band.