Mike Kilroy was first contacted by David Watson soon after the band was formed to discuss the purchase of a euphonium since when the close association has continued, with Mike being offered the position of Honorary President of the Band. Mike began playing the tenor horn with Delph Band aged 8 progressing to Solo Euphonium five years later. Aged fifteen he joined the legendary CWS Manchester Band. Enjoying many successes at major contests in the UK and abroad during his playing career, Mike has been principal euphonium of Wingates, Yorkshire Imperial Metals, Leyland DAF, Fairey Band, Grimethorpe Coliery, Brighouse and Rastrick, Desford Colliery, YBS and Hepworth Band. He has appeared as a guest and soloist with many of the country’s top bands and has featured as a soloist at Gala Concerts and festivals across the world and has been awarded many solo prizes including the “Outstanding Instrumentalist” at The New Zealand National Championship in 1999. Mike has conducted several bands in Great Britain and abroad and has adjudicated numerous competitions in Europe and the UK, including our own Brass Festival (see later). He regularly contributes articles and reviews to the brass band press. Mike is the current Chairman of Brass Bands England and aspires to continue making a positive contribution to the Brass Band Community which has played such an important part of his life. This role presents the opportunity to support and develop bands whilst promoting the benefits of and encouraging the participation in this unique pastime, Brass Banding. In his commercial life Mike is Managing Director of a successful Business strategy development and leadership training company based in Yorkshire. Despite his many commitments, Mike continues to be a most avid and enthusiastic supporter of the Band, and attends the Annual Dinner & Awards Evening.

It was after taking part in the Granting of the Freedom of Marlborough to the Captain, Officers and ship’s company of HMS Marlborough that Commodore Jamie Miller first became associated with the Band.  The Band had impressed the Commanding Officer at the time, Captain JF Rodley, RN who, after being posted elsewhere, passed on his enthusiasm to the new Commander of HMS Marlborough, Captain Jamie Miller, and he invited the Band to attend Navy days in Plymouth in August 1997, welcoming the band with his great enthusiasm and support. From that moment HMS Marlborough and the Royal Navy became part of the “family” of Phoenix Brass.

The following year, Phoenix Brass took part in the first International Festival of the Sea held at Portsmouth, playing on the flight deck of HMS Marlborough itself, an event which attracted large numbers of people to the ship and gave rise to some remarkable Naval dancing! Invites to other events occurred. Jamie was offered the position of Honorary Vice President which he kindly accepted.

Jamie, who until recently was Naval Regional Commander Wales and Western England, retired in November 2017 after a highly decorated history that included seeing action in the Falklands conflict where he survived the sinking of HMS Coventry, assuming command of the frigate HMS Avenger, deploying again to the Falklands, South America and the West Indies for counter drugs operations. He later became Executive Officer of the aircraft carrier HMS Ark Royal spending. Promotion to Captain took him to London as the Naval Assistant to the First Sea Lord.

He subsequently became Deputy to the Royal Navy’s Sea Training Admiral and was promoted Commodore and Commander Amphibious Task Group in July 2001 before being appointed Aide de Camp to Her Majesty the Queen in November 2001. He was awarded the Legion of Merit (Officer) by US President George Bush and the Queen’s Commendation for Valuable Service and being appointed to be a Commander of the Order of the British Empire. Jamie continues to support the Band.

Mark Sheldon became associated with the Band after players were invited to further visits on HMS Marlborough. The Band performed at two further International Festivals of the Sea and played for the 4th Frigate Squadron Carol Services held on HMS Warrior in Portsmouth. The Band’s affiliation grew stronger and players were invited to play and attend the Navy Gun Runs at HMS Collingwood. Mark was invited to hold the position as Honorary Vice President which he, too, kindly accepted.

Mark has since retired from the Navy and works in the Maritime, Capability, Trials and Assessment for the Ministry of Defence.

Christine has been closely associated with the Band since its formation in 1993. She and her husband, Ernie, supported the Band in every way they could in its early days. Ernie accepted an invitation to become the Band’s first President but sadly he died early on the Band’s life and Christine then became Honorary Vice President.  Christine and her daughter, Cheryl, remain keen supporters of the Band today. 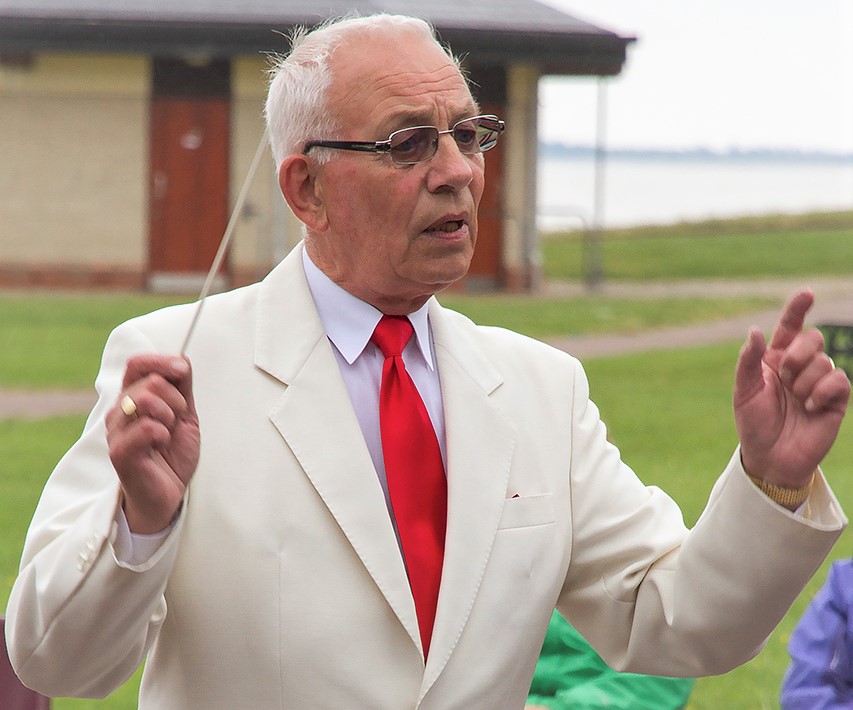 David Watson’s full time involvement in brass bands began at the age of seven when he played cornet in the Harwich Salvation Band. At the age of 21 he helped form the Harwich Concert Band of which he became band secretary for fifteen years. During this period he became the Musical Director of the Harwich Accordion Orchestra which achieved many successes in concerts and competitions including winning the advanced section at the British National Championships. He was also called upon to conduct the Clacton-on-Sea Concert Orchestra during a long absence of their own Musical Director.

David moved to Marlborough and joined the Kennet Vale Band as a cornet player but soon became the Conductor of the Youth Band. At the same time he helped form the Kennet Accordion Orchestra that subsequently became the Southern Area and also Thames Area Champions and won many other competitions. He later became Musical Director of a re-formed Hungerford Town Band working hard to ensure its survival.

In 1993, David helped form Phoenix Brass Band becoming its first Musical Director. David’s unique experience, hard work and dedication has helped the Band steadily grow over the past 25 years. His relaxed and friendly manner in front of audiences has also helped immensely to increase the popularity of Phoenix Brass.

Our players come from all walks of life with a variety of professions and all share a love of making brass band music together.