For the second time in the run up to Christmas, players from Phoenix Brass were out carolling at the Tesco store in Tidworth. The Band delighted shoppers with their mix of traditional favourite Christmas carols and a mix of festive tunes. Many shoppers, accompanied by their children, stopped to listen to the Band as they performed in the warmth of the store.

Some players from Phoenix Brass had a great time playing carols at The Roebuck Pub in Marlborough recently. What could be more festive than a brass band playing carols in a traditional pub? The Band played classic Christmas carols and a selection of festive tunes to entertain the regulars and diners. The sounds of a traditional brass band with a mixed repertoire that suited everyone! Afterwards, the players enjoyed mince pies and mulled wine.

Residents and the care team at The Lakes Care Centre near Cirencester enjoyed Christmas carols and festive tunes performed by Phoenix Brass recently. Mandi Short, Home Manager, said “The residents loved listening to the Band play carols. They enjoyed singing along to some firm favourites”.

Christmas carol books were handed out to everyone that had come and the residents thoroughly enjoyed singing along in the run up to Christmas.

The home offers compassionate, individualised residential, dementia, respite and day care for up to 64 residents. The purpose-built home environment has been specifically designed to support the needs of older people including those with dementia, from aiding memory in day-to-day living and reminiscence therapy, to reinforcing personal identity and navigating around the home.

A break in the recent wet weather allowed local residents, friends, families and supporters of the Band gather around the Christmas tree outside the War Memorial Hall in Froxfield to sing Christmas carols. This was followed by a short social evening, with refreshments provided by the Friends of Phoenix, and the Band’s Grand Christmas Draw.

For the third year running, players entertained shoppers all day at Tesco, Tidworth as they prepared for the festive period.  Sitting in the comfort of the store, many customers took time from their busy shopping schedule to listen to the Band with many small children dancing to the festive tunes and carols.

Phoenix Brass entertained the crowds with a varied selection of festive musical pieces.

Players returned to Kennet Gateway Club in Woodborough for what has become a customary event in the Band’s festive diary. Kennet Gateway Club was set up to provide a social life for adults with learning disabilities and the musicians always look forward to the evening, playing a variety of festive favourites and Christmas carols to the delight of Club members.

The evening provides the opportunity for players to ‘dress down’ from their normal band attire. Dressed in a variety of Christmas and festive jumpers the players performed a mixed programme of music under the baton of Anthony “Tug” Palmer. 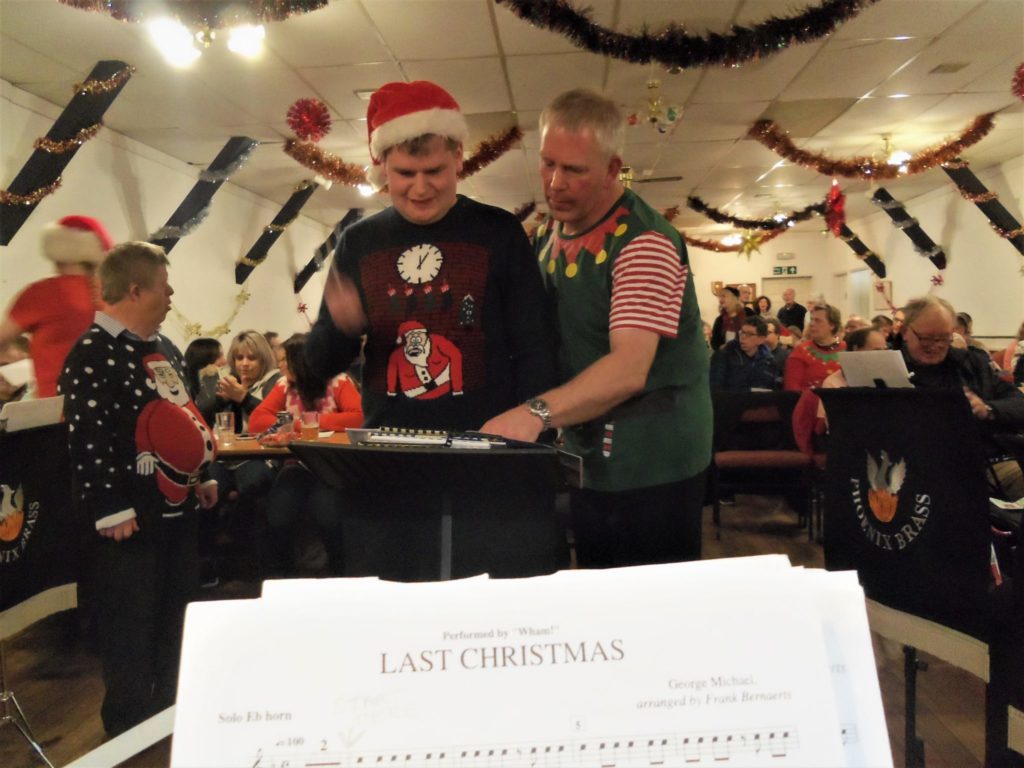 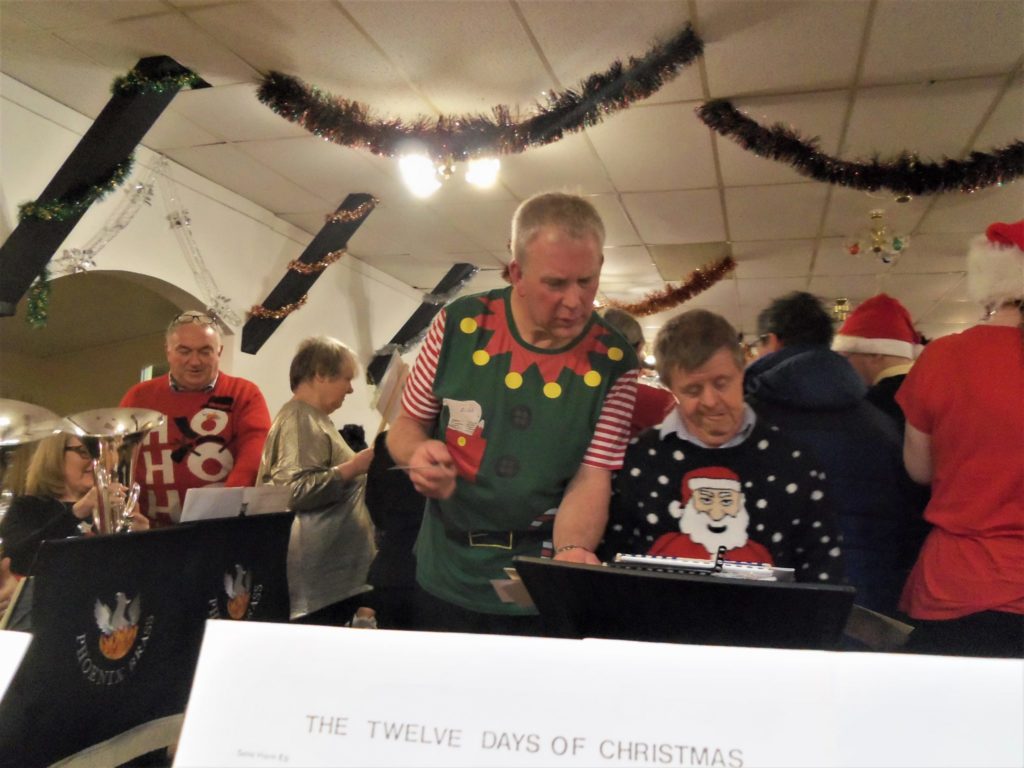 The Walwyn Hall welcomed Phoenix Brass back for its annual Christmas Concert for what has become a recurring event in the Band’s annual diary. Despite a number of competing local events the chairs were filled and the audience were treated to a variety of festive and seasonal tunes. The second half of the Concert was interspersed with what has become the customary singing of Christmas Carols and this year was no exception with the audience joining in with great gusto.

The audience were treated to a euphonium duet with Liane Squibb and Helen Parkin performing “Babe in a Manger” which received rapturous applause for their performance.

Jamie Greenwood, aged 14 years, made his debut appearance playing with the Main Band at the Concert having progressed through the Training Band, with family, relatives and friends in the audience.